Or send us email: 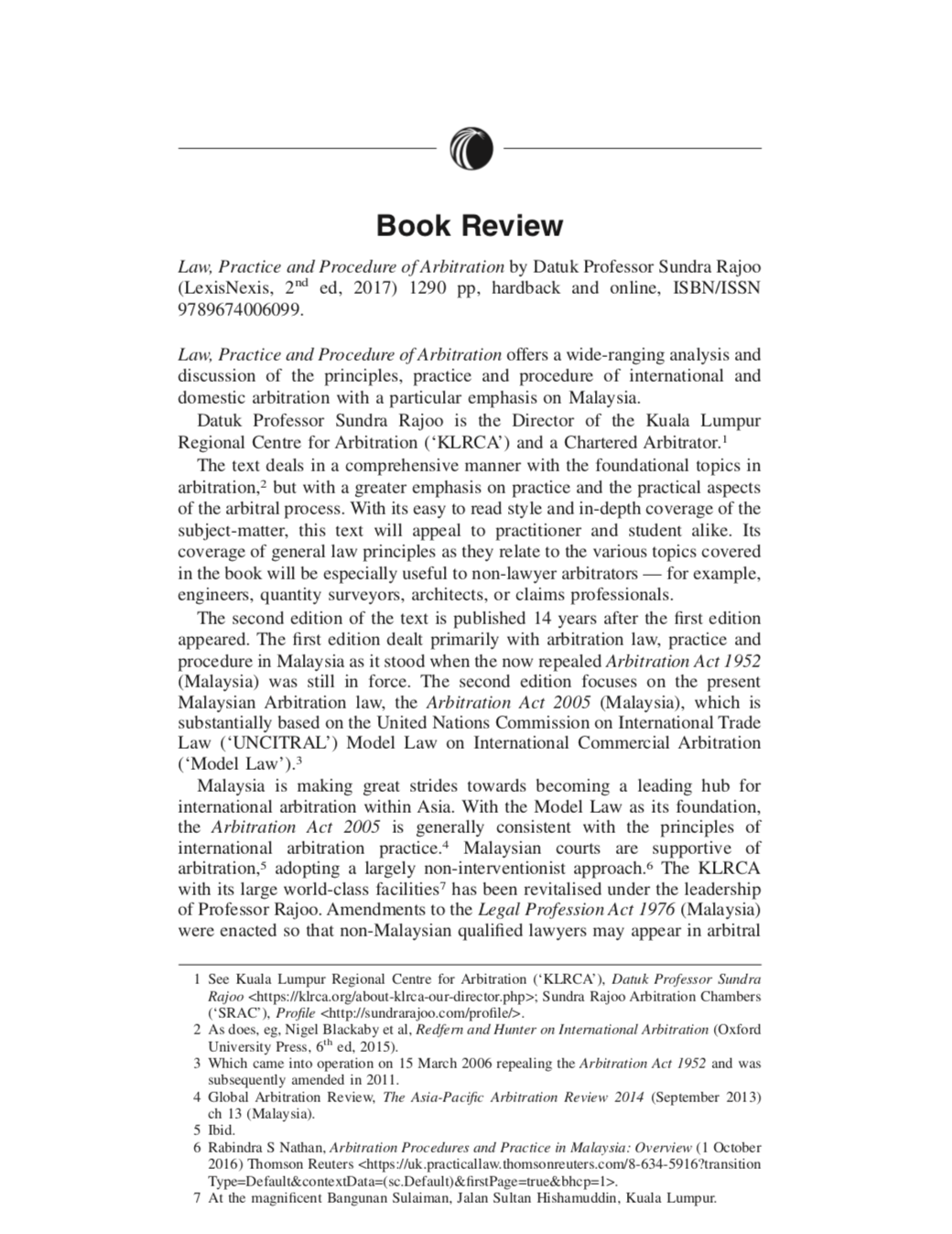 Posted at 05:13h in Articles by superadmin

Law, Practice and Procedure of Arbitration offers a wide-ranging analysis and discussion of the principles, practice and procedure of international and domestic arbitration with a particular emphasis on Malaysia.

Datuk Professor Sundra Rajoo is the Director of the Kuala Lumpur Regional Centre for Arbitration (‘KLRCA’) and a Chartered Arbitrator.1

The text deals in a comprehensive manner with the foundational topics in arbitration,2 but with a greater emphasis on practice and the practical aspects of the arbitral process. With its easy to read style and in-depth coverage of the subject-matter, this text will appeal to practitioner and student alike. Its coverage of general law principles as they relate to the various topics covered in the book will be especially useful to non-lawyer arbitrators — for example, engineers, quantity surveyors, architects, or claims professionals.

The second edition of the text is published 14 years after the first edition appeared. The first edition dealt primarily with arbitration law, practice and procedure in Malaysia as it stood when the now repealed Arbitration Act 1952(Malaysia) was still in force. The second edition focuses on the present Malaysian Arbitration law, the Arbitration Act 2005 (Malaysia), which is substantially based on the United Nations Commission on International Trade Law (‘UNCITRAL’) Model Law on International Commercial Arbitration (‘Model Law’).3

Malaysia is making great strides towards becoming a leading hub for international arbitration within Asia. With the Model Law as its foundation, the Arbitration Act 2005 is generally consistent with the principles of international arbitration practice.4 Malaysian courts are supportive of arbitration,5 adopting a largely non-interventionist approach.6 The KLRCA with its large world-class facilities7 has been revitalised under the leadership of Professor Rajoo. Amendments to the Legal Profession Act 1976 (Malaysia) were enacted so that non-Malaysian qualified lawyers may appear in arbitral

proceedings in Malaysia either as counsel or arbitrator.8
The KLRCA Arbitration Rules were revised in 2013 to include emergency

arbitrator provisions, empowering the tribunal to award interest both before and after the award, enhancing the confidentiality of arbitrations, with a revised schedule of fees and administrative costs to maintain KLRCA’s claimed 20 per cent cost advantage over other similar institutions.9 The KLRCA Arbitration Rules have now been recently revised in 2017 including new provisions for joinder of parties, a new power of the Director of the KLRCA to consolidate disputes, and for the technical review of awards.10 The KLRCA Fast Track Rules were also revised in 2013 and the KLRCA i-Arbitration Rules 2013 (which provide for a shariah compliant arbitral process) were introduced. Recently the KLRCA, as a world first for an arbitration institution, launched its suite of Standard Form of Building Contracts.11

In this second edition, Datuk Professor Rajoo has expanded and updated the first edition with developments brought about by the Arbitration Act 2005.12While the text provides a thorough detailed guide on arbitration law and practice in Malaysia, it also makes frequent reference to cases in other Model Law Asia-Pacific countries, as well as extensive reference to English authorities (given their global prominence).

Model Law, the ICSID Convention, and not to mention the New York Convention.

The hardcover text includes an e-book which can be downloaded upon purchase of the hardcopy. The e-book includes a very helpful and functional ‘Search within Book’ facility, and links from the table of contents to the text — providing for convenient and easy navigation.

The text follows the usual general framework of a work of this kind with a Malaysian and practical focus.

The part of the text entitled ‘Breach of Arbitration Agreements and Stay of Court Proceedings’ deals not only with stays of concurrent court proceedings (including applicable procedure and anti-suit injunctions) but conditions for obtaining a stay and the terms and effect of stays.

The section ‘Commencement of Arbitration & Establishment of the Arbitral Tribunal’ presents a detailed discussion of the issues pertaining to the initiation of the arbitral process and appointment of the tribunal, including detailed reference to the procedures under the Malaysian Arbitration Act 2005. Under the Malaysian Act, the Director of the KLRCA is the default appointing authority where the parties have failed to agree on an appointment.15 If the KLRCA Director fails to make an appointment within 30 days of being requested to do so, the parties may request the High Court to make the appointment.16 There is an examination of the removal of an arbitrator, and the remuneration of arbitrators.

The work offers many practical insights as to the conduct of arbitrationsand the procedure at the hearing, default by parties and its consequences, as well as party representation in arbitrations including the position of foreign lawyers who are not excluded from representing parties in international and domestic arbitrations in Malaysia.17

The discussion on Evidence in Arbitrations includes a general discussion followed by the position of the arbitral tribunal and the courts in Malaysia under the Arbitration Act 2005, including the power given to tribunals to order that any evidence be given on oath, or affirmation, the English position on evidence in arbitrations seated there and a discussion of the relevance of the International Bar Association (‘IBA’) Guidelines on the taking of evidence in international arbitration. The text discusses general issues of evidence, including evidential weight, witnesses, receiving and excluding evidence, as well as the interesting issue of the tribunal relying on its own knowledge and experience and the crucial issue of expert evidence.

There is a comprehensive analysis of the Powers, duties and liability of the

Arbitral tribunal and of the support for arbitration provided by the Malaysian High Court.

As might be anticipated, there is a thorough examination of the Arbitral Award including the requirements of an award, mistakes and omissions, remedies, the effect of a valid award, interest and costs, settlement offers and the assessment of costs, with a chapter on each topic. Challenging an award, and applications to set aside awards, as well as award enforcement are also given detailed and learned consideration.

The principle enshrined under Malaysian law is the internationalist principle that ‘an arbitration award is final, binding and conclusive and can only be challenged in exceptional circumstances’.18 Topics covered include correction and interpretation of an award, and recourse against an award including applications to set aside an award under s 37 of the Arbitration Act 2005 which is modelled on art 34 of the Model Law. Examples of arbitral misconduct occasioning breaches of natural justice are provided.19

The vexed subject of conflict of laws in arbitration including the choice of law applicable to the arbitration agreement and arbitration proceedings is elucidated. As the author states, ‘it is common that arbitration clauses in international commercial contracts do not contain a specific provision defining the law applicable to arbitration agreements (and that) identifying (such) law, has proven to be a complex process’.20 This issue is also pursued in the Neil Kaplan Lecture by the Hon James Spigelman QC, ‘The Centrality of Contractual Interpretation — A Comparative Perspective’,21 who suggests that ‘an express choice [of law clause governing the arbitration agreement] is advisable in a case where the governing law of the agreement and the choice of the seat diverge’22 as ‘private international law rules for choice of law vary so much from one legal system to another, and the principles are so discretionary, that on many occasions different decision-makers quite reasonably, reach divergent conclusions’.23

A List of Legislation and Rules provides reference with web links to leading arbitration laws and soft laws, guidelines, codes and notes.